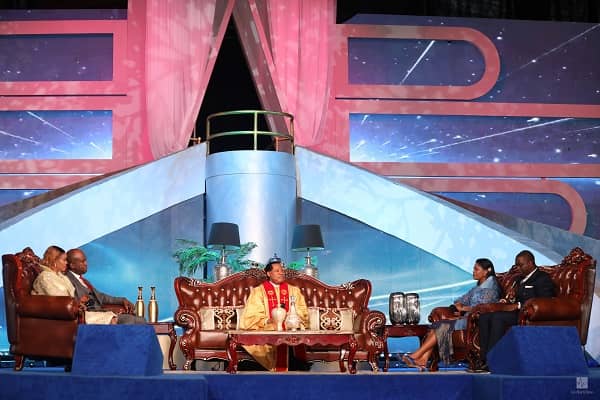 Year of Preparation kicks off with an exciting ‘month of Celebration’.

A burst into euphoric scenes evinced at the January Global Communion Service as the man of God, Reverend (Dr.) Chris Oyakhilome declared January to be ‘the Month of Celebration’. This was of great peculiarity seeing that the month of January, in previous years, was a time of utter meditation and broad discussions on the message of the year as announced by the LoveWorld President.

In the exclusive global service, Pastor Chris was joined on set by the esteemed CEO, LoveWorld Inc., Pastor Deola Phillips and other senior Pastors: Pastor Lanre Alabi, Pastor Yemisi Kudehinbu and Pastor Emeka Eze. They all took turns to share on the message of the year, heralding its timely significance. Reading from Psalm 127:1, Pastor Chris admonished the global audience that except the Lord prepares them, their efforts would only prove futile. “Let the Word of God build you up; you can’t prepare yourself without it,” he remarked. Propounding from the scriptures that the passover is an event of judgement contrary to the broadly thought ceremony of feasting, Pastor Chris advanced that the catching away of the church is imminent and the body of Christ is rightly positioned for the fulfillment of the ultimate will of God.

Attesting to a witness of the Spirit in him, the LoveWorld President declared January as the ‘The month of Celebration’. The global audience joyfully received the Word and are propped for a spree of celebration throughout the month and beyond. Congratulations to all LoveWorld citizens on a glorious ‘Month of Celebration’ in ‘the Year of Preparation’.