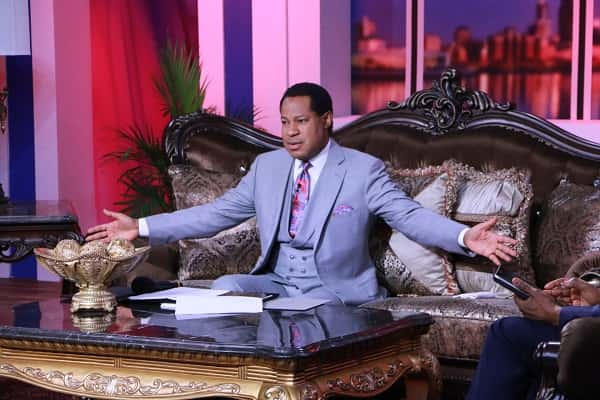 “In your spirit, you are going to be standing lifted up,” Pastor Chris declares to global congregation.

Joyous celebration met the announcement of September as ‘the Month of Uplifting’ by the man of God, Reverend (Dr.) Chris Oyakhilome at the just concluded Global Communion Service.

Reading from 1 Chronicles 14:1-2 and Acts 3:1-8, Pastor Chris further expounded on the word of the month. He highlighted the story of the lame man at the gate of beautiful who was healed by Peter and John, as recorded in Acts 3:1-8. He remarked that, the man responded to the apostles, in order to be lifted. Pastor Chris, then admonished the congregation to always respond to God in this ‘Month of Uplifting.’

This month of September is a special one, We are talking about God And what work does he do, all he does is talk. Jesus said I do what I see my father do, what he does is talk.

Why is that important? It’s a sign of Power and authority. You’ll be amazed what you can do to your life with talking, most people talk but they say the wrong things, if you Say the right or wrong things, they’ll come to pass. Your life is confusing because you’re mixing good and bad water and that can be a problem.

Last month was a very beautiful month. It was the month of beauty. Was your life made beautiful? Think what God has done with you, What glory He has brought into your life. how you see matters. Some have color blindness. They don’t see correctly. In the spirit, learn to see as God sees. Learn to call what you see what God calls them.

Look at this. This is black. All the colors have been absorbed. I was taught that when it looks this way it’s called black. It doesn’t matter what language you use. That’s black. Why do they call it black. You were taught to recognize it as black. This is red. That’s how you were taught.

In the spirit, you can be taught to see, to interpret what you see, you look and call it what God calls it. Some of us have been taught to use our spiritual senses. You can’t use your sense of touch to interpret color. Same in the spirit. Your Sensitivity to the spirit of God will help you in judging what you see and feel  and how to respond. As a child of God born in His image, you’re taught to respond.  In training royalties, there are certain things they are taught, they are taught authority and humility. Every great person is a humble person. God exalts the humble. He was great by being humble. Humility is required for God’s promotion.

You teach royalties the importance of authority and how to use it. How to respond and conquer their emotions. Otherwise you can’t live a truly royal life but like a commoner. God teaches his children like a loyalty because that is what he thinks about them. Learn how to respond and chose your words, How to control anger, anger destroys the beauty of loyalty. Royalty never uses anger until the limit. It’s only against those that must be destroyed. You can’t use it against your brothers and sisters because they’re not to be destroyed, Don’t be angry for long. (For the wrath of man worketh not the righteousness of God. James 1:20)

Why is all that important because of what God is preparing us for.

And David perceived that the LORD had confirmed him king over Israel, for his kingdom was lifted up on high, because of his people Israel. (1 Chronicles 14:2 KJV).

How could a kingdom be lifted? It was exalted. There was honor on the kingdom. Because of his people Israel. His kingdom was lifted on high.

Now Peter and John went up together into the temple at the hour of prayer, being the ninth hour. And a certain man lame from his mother’s womb was carried, whom they laid daily at the gate of the temple which is called Beautiful, to ask alms of them that entered into the temple; Who seeing Peter and John about to go into the temple asked an alms. And Peter, fastening his eyes upon him with John, said, Look on us. And he gave heed unto them, expecting to receive something of them. Then Peter said, Silver and gold have I none; but such as I have give I thee: In the name of Jesus Christ of Nazareth rise up and walk. And he took him by the right hand, and lifted him up: and immediately his feet and ankle bones received strength. And he leaping up stood, and walked, and entered with them into the temple, walking, and leaping, and praising God. And all the people saw him walking and praising God: And they knew that it was he which sat for alms at the Beautiful gate of the temple: and they were filled with wonder and amazement at that which had happened unto him (Acts 3:1 – 3:10 KJV).

I don’t have the money you’re asking for. What I have I give you. What he had was not prayer, Jesus gave us power to heal. Not power to pray. There are people conjuring power to pray instead of power to heal. Jesus gave them power to heal all manner sickness and disease among the people. Peter understood that, He didn’t pray but commanded healing. He lifted the man and he leaped. The man leaped and walked.

The feet and ankle bone received strength, the bible didn’t let us know that the man felt, like the woman with the issue of blood felt in her body that she was healed. It’s an inner feeling. Many just felt something inside. Her faith at work. Remember it was hemorrhage. She felt. There was a feeling inside.

Learn to respond to God. That’s where the miracle, power and manifestation is.

David perceived that God has confirmed him King. His kingdom was lifted up, there’s a knowing of faith.

There is an  uplift by the power of the Holy Spirit. There’s an uplift for the ministry, your church, you as an individual, your family. You’re going to respond to God, In your spirit, you’ll be standing. Leaping up. Worship Him. Give Him praise. Hallelujah. Glory

Healing to the Nations Live