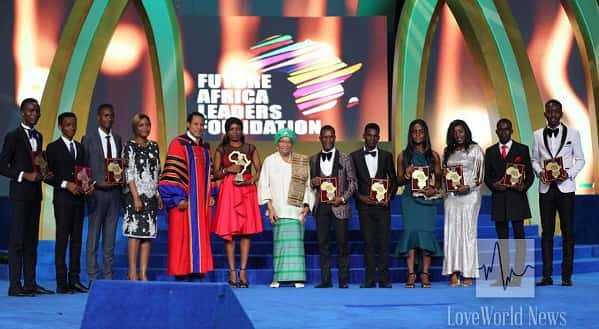 “There is nothing, more or less, that an African leader cannot do!” — President Ellen Johnson Sirleaf.

The New Year’s Eve Service with Pastor Chris featured a special segment: the Future Africa Leaders Award (FALA). During the much-anticipated ceremony, young, enterprising African leaders were presented with awards in honor of their selfless and devoted service to improving the socio-economic state of their nations. The former President of Liberia and Africa’s first female President, Ellen Johnson Sirleaf, graced the occasion as special guest of honor.

In a thought-provoking speech, the former President posited that Africa has come a long way and made great progress. President Sirleaf stated that, despite the continent’s struggle with moving away from the trappings of colonialism, Africa has taken charge of her destiny. In her words, “there is nothing, more or less, that an African leader cannot do.” She, however, concluded that Africa needs to move at a faster pace, encouraging individuals and systems to support young leaders and promote gender equity in leadership as a way to put more hands to the plough in bringing Africa’s glorious future closer.

With these patriotic words, young African leaders from different countries were called out to receive the prestigious FALA award from LoveWorld President, Reverend (Dr.) Chris Oyakhilome. These distinguished young leaders from Togo, Ghana, Cameroon, Nigeria, Angola, Benin Republic and more, who have made remarkable impact in various fields even at the expense of their lives, were honored with awards accompanied with a cash prize of 10,000 USD. Congratulations to all winners of the FALA Awards 2019.