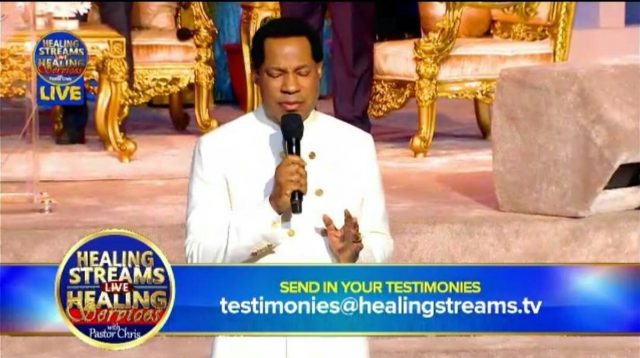 Diverse miracles of healing recorded from across the globe as Pastor Chris ministered in the fullness of the Spirit.

With palpable excitement, LoveWorld CEO and Director of the Healing School, Pastor Deola Phillips welcomed the mammoth global audience participating from different centers across the globe to the destiny-altering program as she led the opening prayer.

An inspiring panel discussion anchored by the esteemed Pastor Deola Phillips joined by senior ministers in the Healing School including the highly esteemed Rev. Tom Amenkhienan and the highly esteemed Rev. Ray Okocha, was featured. The panelist centered their discussion on the global impact of the March edition of the Healing Streams Live Healing Services with Pastor Chris, recounting the numerous testimonies of healings recorded from across the globe and the resultant effect in the rapid spread of the Gospel.

A session featuring testimonies from the previous edition anchored by the highly esteemed Evang. (Dr.) Eddy Owase brought tears of joy and hope for a miracle to many expecting their miracles in this edition. Also, present in the studio were those with diverse ailments. They all came to receive that touch from God that would change their lives completely. As they watched and listened to the testimonies from the past editions of the healing program, faith was stirred in them and they received the assurance for their expected miracles.

The arrival of the man of God, Pastor Chris was a moment of destiny for many as he shared deep truths on the life and power of Christ. The atmosphere was fully charged and the power of God was available to heal every disease as he began to minister to those present in the studio and those connected virtually. What an awesome moment it was for the global congregation as the man of God ministered and miracles began to happen as testimonies began to flood in from all nations of the world. Broken limbs receiving strength, cancer disappearing, and so many other miracles were recorded from different Healing Centers set up in hospitals, homes, restaurants, and several other designated places across the globe. There was great rejoicing and celebration all over the world.