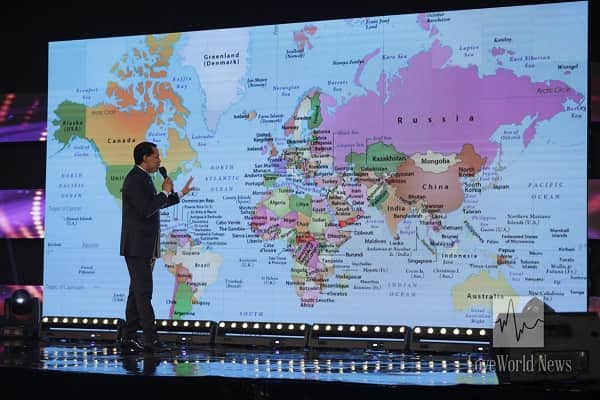 The second edition of the Global Day of Prayer with the man of God, Reverend (Dr.) Chris Oyakhilome in the year of preparation, 2021, enveloped the airwaves at 6 pm GMT+1, Friday, June 25th through to Saturday, June 26th. The over 24 hours prayer expedition, which was broadcast live via all LoveWorld TV stations, numerous terrestrial TV stations, radio stations, and various internet platforms, recorded over 5 billion people from every nation.LoveWorld CEO, Pastor Deola Phillips leads the opening prayer of the special prayer program.

LoveWorld President, Pastor Chris Oyakhilome, opened the special prayer program with a heart-warming welcome speech amid great rejoicing by participants. He congratulated the global congregation for being part of the biggest thing in the history of the world, recounting the monumental global impact of the Global Day of Prayer since its inception over a year ago. He further stressed the need for the Church to continue in fervent prayers as he exhorted and led the saints in heartfelt prayers to God for all nations of the world.

Traversing Africa, Europe, North America, Asia, South America, the prayer chain continued unbroken as senior ministers in the LoveWorld nation including the esteemed Rev. Tom Amenkhienan, Rev. Ray Okocha, Pastor TT Temisan, Pastor Kay Adesina, and others took the prayer baton and led in prayers. Seasoned ministers of the Gospel from partnering ministries across the globe also took turns to lead in prayers. Prayers were led from India, Nigeria, Germany, Canada, Côte D’ Ivoire, Hungary, Romania, Spain, Ghana, the United Kingdom, the United States, South Africa, Zimbabwe, and several other countries. Fervent prayers were made for leaders of nations, the salvation of souls, persecuted Christians, the sick, youth, and children among others. As the various ministers led in prayers, they also gave profound words of prophecy concerning the nations, the Church, the spread of the Gospel, and more as inspired by the Holy Spirit.

The prayer program also witnessed a special session of profound teaching and prayers led by world-renowned healing evangelist, Pastor Benny Hinn from the United States of America. While teaching, Pastor Benny Hinn emphasized that in prayers there has to be forgiveness. “Forgiveness is vital to the right relationship with God,” he posited. Electrifying ministrations in songs led by LoveWorld Singers from different nations of the world including Nigeria, the United States of America, the United Kingdom, and South Africa, stirred heartfelt worship to God in participants as they continued to pray.World-renowned Healing Evangelist, Pastor Benny Hinn, ministering from the U.S.A.

The over 24 hours prayer marathon came to a climactic close with a power-packed final session with Pastor Chris on Saturday, June 26th. Pastor Chris expounded from John 16:23, Jeremiah 31:33, Acts 3:25, and other scriptures on the difference between prayer in the old testament and prayer in the new testament highlighting 5 major points (Praying in the name of Jesus, the work and effect of righteousness, we are the executors of His will, we are heirs of the covenant, and joint-heirs with Christ). He then led the saints in prayers for the liberation of the nations of the world. Songs of victory and rejoicing ensued as participants from around the world joined Pastor Chris to celebrate answers to prayers and ultimately total victory over the cohorts of darkness. The impact and success story of the 6th Global Day of Prayer will continue to resonate across the globe even as we look forward to the next edition in the third quarter of the year.