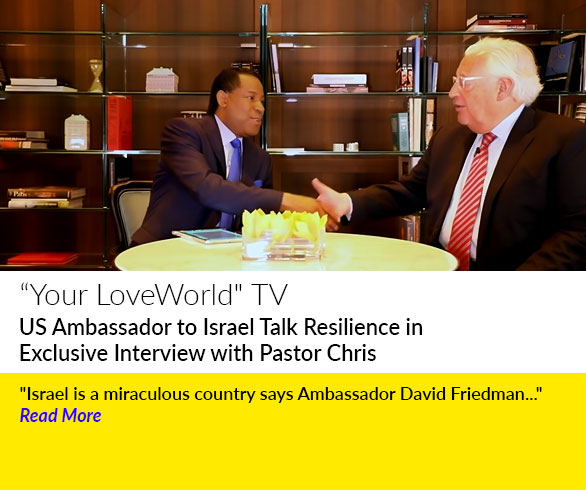 LoveWorld President, Reverend (Dr.) Chris Oyakhilome, in a special “Your LoveWorld” TV episode, held an exclusive interview with the US Ambassador to Israel, David Friedman.

Opening the discussion, Pastor Chris questions Ambassador Friedman about his impressions to the reactions and backlash experienced in the last year since the US announced it would be moving its diplomatic mission to the officially recognized capital of Jerusalem.

In his response, Friedman reflected on the successful year, citing the peaceful and tranquil transition of the embassy move from Tel Aviv to Jerusalem. He asserted that there has been surprising no backlash to the official declaration, from the opening ceremony of the embassy to today. He expressed to Pastor Chris that the move does not in any way denigrate from the desire of the US to see peace in the region or to see the Palestinians live in dignity, with autonomy.

Pastor Chris Oyakhilome, who was a special guest at the opening ceremony of the new US embassy in Jerusalem, further inquires of other countries disposition to the move, if they have chosen to follow the United States’ lead in their official recognition of the Israeli capital.

Ambassador Friedman concedes that other countries are not moving their embassies at the fast pace that the United States would like, but that he believes that they are ‘moving in that direction.’ Presently, Guatemala is the only country that has recognized Jerusalem as Israel’s capital and moved its embassy, Friedman stated.

He, however, noted that other countries, such as the Czech Republic, have opened diplomatic facilities in the city or have actively discussed doing so.
Throughout the interview, the discussion focused on the security challenges facing Israel. Ambassador Friedman praised Israel for its resilience and fortitude under adversity. He called Israel a ‘miraculous’ country, saying he was very impressed with the people of Israel.

Considering the security risks that it faces – the enemies at its border and terrorists threatening its existence – Israel has not only survived against the odds, it has excelled in developing a world-class economy, as well as taking lead in high technology.